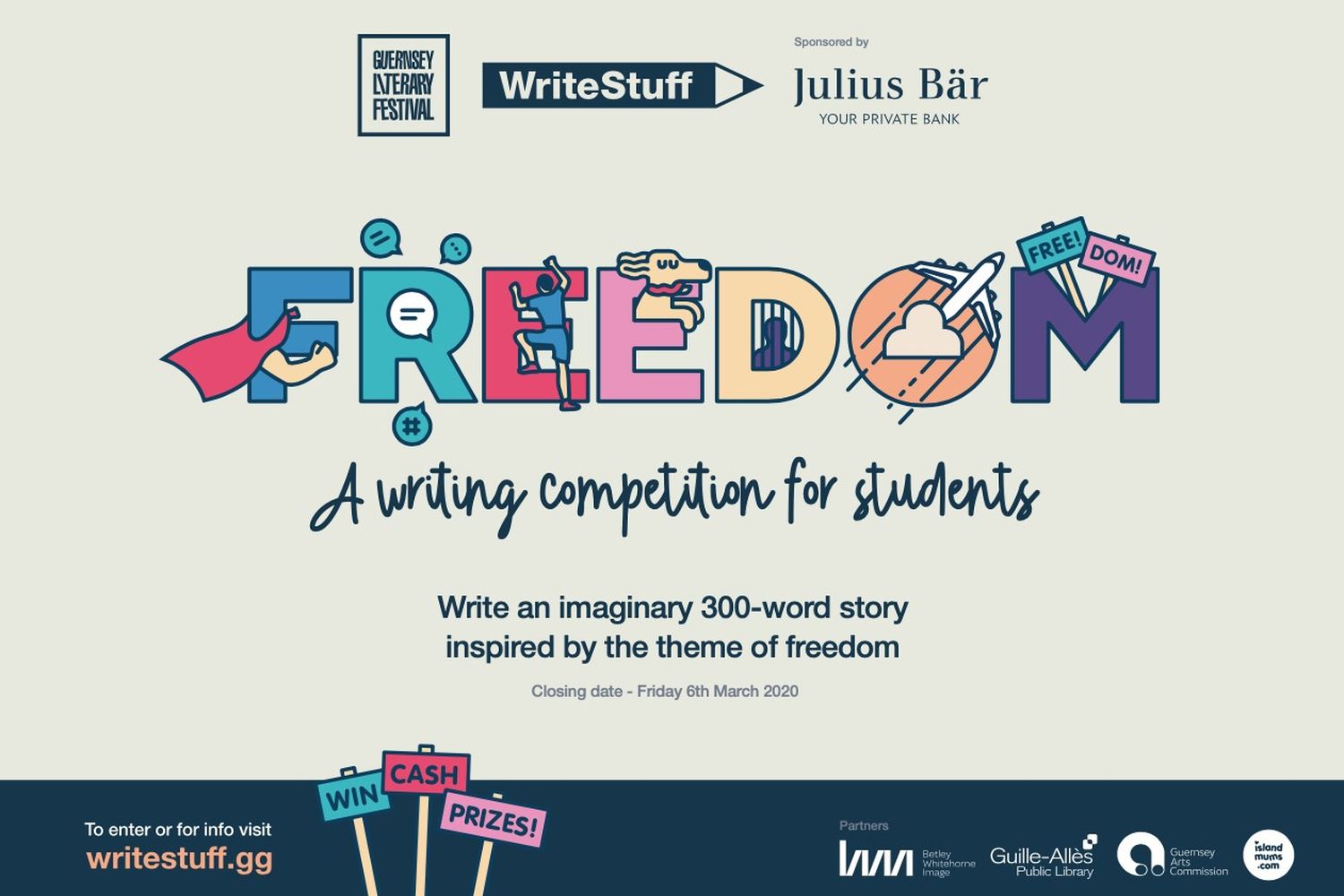 Nearly 500 students from 17 local schools took part in this year’s Write Stuff writing competition organised by the Guernsey Literary Festival; the standard was high for the judges, all successful UK writers themselves.The subject of this year’s competition was Freedom, particularly apt when the island celebrates 75 years since its liberation from German forces in 1945, and the young writers certainly used the title creatively, with stories covering a huge range of variations on the subject.This year’s winners were Chloe Sebire from Hautes Capelles School (Primary class), Rebecca Hind from the Grammar School (Intermediate) and Naomi Miller, the Grammar School (Senior).Describing Chloe’s story, which was based on recordings made by her 96-year-old great-grandmother now living in South Africa, judge Andy Riley said, ‘The writer has filled this evacuee’s letter with gorgeous detail. It’s a convincing snapshot of a girl’s life during wartime, with new experiences and excitement amidst the upset and the fear.’Rebecca’s story drew praise from judge Neal Layton: ‘A gripping start pulls the reader into this story which gradually opens up to describe a historic figure most will be aware of: the suffragette Emily Davison. Whilst written in a succinct creative style, the story has also been well researched.’And Onjali Rauf was extremely complimentary about Naomi’s winner in the Senior class: ‘Any story that champions the utter indestructibility of books is always going to be a rich contender. But this absolutely beautiful piece gripped me from the very beginning, and left me hungering for more.’The competition opened in January and young writers had until early March to submit their entries. The Write Stuff has been one of the Literary Festivals big participatory events and this year was one of the few events to get off the ground; the Festival itself, with 60 visiting writers, would have gone ahead last weekend if not for the Covid19 pandemic (NOTE FOR EDITOR: GLF 29 Apr to 3 May). But the Guernsey Literary Festival will be back from 13-16 May next year.The current difficult situation was underlined by Jean-Luc Le Tocq of Write Stuff sponsors Julius Baer, ‘At challenging times like this, a good news story which celebrates the creative talents of the island’s young people is especially welcome,’ he said.Head judge for the competition was a historian and best-selling author who is no stranger to the Festival, Huw Lewis-Jones, and the other judges were Andy Riley (Primary), Neal Layton (Intermediate class) and Onjali Q. Raúf (Senior) all of whom were due to be taking part in the Festival. The filter judges were Tony Booth and Guille-Allès Library staff Adam Bayfield and Rachel Wyatt. Tony Booth and Anne Wilkes-Green supported local schools with the competition.The challenge for young writers in the Bailiwick was to write an imaginary 300-word story inspired by the theme of Freedom. There were three classes, Primary (years 3-6), Intermediate (years 7-9) and Senior (years 10+). It is promoted by Guernsey Literary Festival partners the Guille-Allès Library, the Schools Library Service, Island Mums and The Guernsey Arts Commission.There is a cash prize of £50 and a trophy for the winner in each category, with £25 cash prizes for second and third places. In addition, the three winners in each category are awarded a certificate and have their entries published on the website. A presentation event was planned to take place during the Festival itself but will now be held later in the year.All nine winning stories also have an illustration produced of their story by artist Ginny Morgan, which serves as a cover on their digital story and the original artwork will be given to the winners as part of their prize.This is the first year of a new award, the SEND award, for students with special education needs – and the organisers were delighted by the number of entries received from Le Rondin and the calibre of the two winning entries.

The WriteStuff website is now live with the winners’ stories, judges’ comments, recordings of their stories, and the illustrations by Ginny Morgan. https://2020.writestuff.gg