Sophia (so-fire) by Anita Anand is a detailed and fascinating biography of an Indian princess who was born in 1876 in high society England and whose life consequently spanned some of the most important events in Indian and British history, including two World Wars, the British Raj, the rise of Indian nationalism, the Suffragette movement and the partition of India. 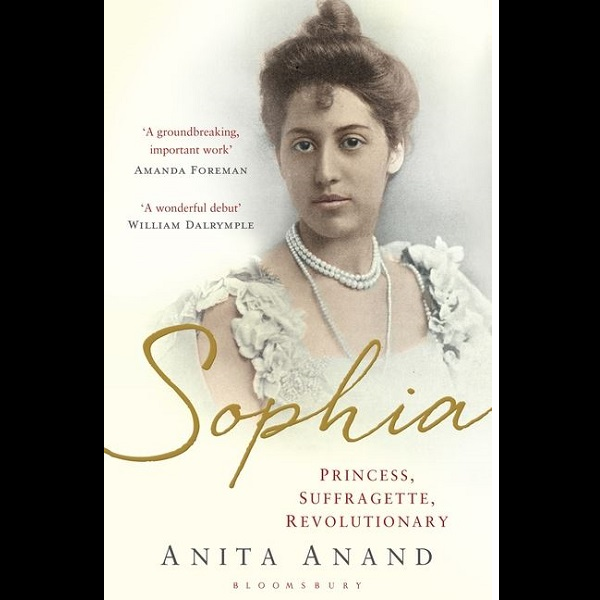 Her father, Duleep Singh, had been deposed, abdicating to the British at the age of just 15. He had been an indescribably wealthy maharaja of the Punjab but was brought to England, where he was doted on and paraded about as Queen Victoria’s handsome protegé. The famous Koh-i-Noor diamond had been seized along with other wealth, and it became one of the crown jewels. A painfully poignant moment is when the Queen has the magnificent jewel recut and presents it to the young maharaja to appraise.

Duleep Singh eventually went on to make his home in England - painstakingly converting a stately home in Suffolk into a Punjabi style ‘mahal’ and living a lavish life, squandering his remaining wealth with a reckless lifestyle. He finished his life sadly and ignominiously in a rundown Paris hotel, eventually resenting the British for taking what he believed was his due.

Sophia, one of Duleep Singh’s eight children, became one of Queen Victoria’s goddaughters and was given grace-and-favour lodgings in Hampton Court Palace, where, with her sisters, she enjoyed being a débutante and a part of upper class society. However she was never one to relish the spotlight. Throughout the book there is a growing tension between the fact of her being one of Queen Victoria’s favourites, and an Indian Princess with no Indian home; neither the British nor the Indian establishment ultimately knew quite what to do with her.

When she secretly goes to her father’s homeland to visit her increasingly nationalistic sister and sees India, the outworkings of the British Raj and the Indian freedom movement for herself, she meets key figures, is changed and returns a revolutionary. She starts to campaign for the thousands of maltreated Asian lascars (dock/ship workers) and becomes a leading light in the Suffragette movement which is by now gaining momentum. One of the main tactics of the Suffragettes was to get themselves arrested, so that they could go on hunger strike and protest accordingly. Despite her best efforts (including trying to throw herself in front of Prime Minister Asquith’s car and repeatedly refusing to pay taxes) she was never sent to prison and so for this and other, perhaps political, reasons, the history books remain relatively quiet about her. When Sophia started selling a pro-Suffragette newspaper by the gates of Hampton Court, King George V grew quite exasperated with her.

Anita Anand has clearly done painstaking research to create this enthralling and, at times, gripping book. Rather than just telling Sophia’s story, she tells it within the encyclopaedic context of the birth and subsequent centuries of the Sikh Empire, the British Raj, the Boer Wars, two World Wars and early 20th century India. We learn about Indian imperialism under Queen Victoria and the behaviour of her representatives there, the role and desperate plight of loyal, yet woefully underprepared Indians in the First World War, the rise of the Indian freedom movement and the lead-up to Indian partition. When Sophia moves into Hampton Court, we are given a potted history of that place too, and when Mahatma Gandhi enters the story we learn about his time in South Africa, the atrocities of Kitchener in the Boer War, and the background to Gandhi’s protests in India - many of the tactics which were learnt from the British Suffragettes and their link through Sophia.

Next year will mark the centenary of the Representation of the People Act of 1918 in which men and women were finally given the equal right to vote, after many years of campaigning and sacrifice. Whilst we all know something of the protests and struggles of the Suffragettes, Sophia really opens your eyes to the extreme lengths they went to, and the utter brutality they suffered at the hands of law enforcement and prison officers.

Despite her privileged position, Sophia’s life is dogged by tragedy, rejection and loss and Anand conveys this compassionately. Towards the end of her incredible life, as World War 2 dawns, Sophia is living a fairly lonely existence in Buckinghamshire but enjoys a new lease of life with a ‘surrogate’ family of evacuees and is very close to her housekeeper, becoming godmother to her daughter whom she nicknames ‘Drovna’ - derived from her own unusual middle name. Anand finishes the book by writing about the tender recollections of those evacuees and Drovna herself, who all remember the time with ‘their Princess’ fondly, and, having read this book, we can understand why.

Books that changed my life

by States Deputy Emilie Yerby No book has changed me more than Amartya Sen’s “Development as Freedom.” Lent to me…

A celebration of Guernsey writing talent

Local writers, novelists, poets and dramatists will have their work – and themselves – on display at the Writers’ Fair…

The Sugar Girls by Duncan Barrett & Nuala Calvi - A Review

Duncan Barrett and Nuala Calvi have jointly authored this readable memoir, which is written to feel just like a novel.…

Join our newsletter and be the first to hear all the news, the latest events and more. Join now